Why I choose Platinum Performance

“One of the key elements in my general program—and especially for my high performance horses—is nutrition! I want to make sure that my horses have all the nutrients and support that reflect their individual needs. Platinum Performance has shown great results in my horses’ health by enhancing their performance and well-being.”

“The Healthy Weight oil is very effective in preparation for traveling by ensuring that my competition horses maintain their ideal weight. It has become a staple in my feed program, especially for those hard-keepers that struggle to keep up their perfect shape. The addition of this product has allowed me to feed healthier with a lesser amount of grain, which traditionally can be hard on their stomachs. I’ve also seen amazing results with my personal horses in improvements of their hoof and coat quality. Another helpful tip is to use the oil as a binder for supplements for your typical picky eaters!”

Originally from Krefeld, Germany, Sabine Schut-Kery is an elite dressage rider and trainer who competes internationally. She was classically trained under Jean Bemelmans and completed her official “Bereiter” exam with the Federation Nationale in Germany. Sabine then furthered her dressage education with other German Masters including Jan Nievelle and Stefanie Meyer-Biss. Sabine continues to hone her advanced skills under the tutelage of Olympic rider, Christine Traurig.

Sabine has won numerous international competitions with young horses as well as FEI. Her equestrian portfolio is diverse having trained two Friesian stallions, Tinus PM and Jorrit PM, through Grand Prix. Sabine is also uniquely multi-talented, having earned her silver driving medal which requires the ability to drive a four-in-hand team. She also continues to participate in extraordinary equestrian exhibitions to the delight of horse-loving audiences from vastly different equine backgrounds. Sabine’s exhibition riding displays brilliantly choreographed quadrilles, pas de deux at Grand Prix level, as well as other specialized driving and riding demonstrations including sidesaddle.

Sabine came to the United States in 1998 to build her career as a professional dressage trainer in Texas. In 2005, she moved to California and currently operates her dressage training business out of the stunning Toyon Farm in Napa, California. Sabine is known for keeping her business boutique, prioritizing quality over quantity. She dedicates herself to her equine partners and clients and focuses her attention on individual needs to ensure quality. Sabine has successfully produced equine partners from a variety of breeds, and her attention to the individual animal has allowed her success with stallions, mares and geldings of all ages. Her training technique aims to enhance a horse’s natural ability and specializes on cultivating the individual need of the horse to reach their highest potential. Her intuitive and sensitive approach nurtures a training partnership that is based on genuine horsemanship and built on respect and trust.

Sabine has been partnered for the past twelve years with Sanceo (San Remo—Rivera, Ramiro’s Son II), the stunning 2006 Hanoverian stallion owned by Alice Womble-Heitmann. Sabine has brought Sanceo up the dressage ranks from the start of his career through the highest levels of the sport calling the stallion “intellectual” and a “quick study” and spending years building their special bond. When Sanceo was a six-year-old, the pair first represented American dressage in 2012 at the World Championship for Young Dressage Horses in Verden, Germany. They competed successfully in Small Tour in Europe and were named to the United States Team for the 2015 Pan American Games in Toronto, Canada, where the team brought home a gold medal and swept the podium in the Grand Prix Freestyle. In 2017 and 2018, Sabine earned the Carol Lavell Advanced Dressage Prize from The Dressage Foundation. Unusual and exciting to be awarded this two years in a row, the purpose of the grant is to provide financial assistance for coaching and training to a talented, committed, qualified rider whose plan is to reach and excel at the elite, international standards of high performance dressage. Sabine and Sanceo were members of the winning 2018 FEI Nations Cup USA team at the CDIO 3* in Wellington, Florida. From 2019 to present, Sabine and Sanceo have been mainstays of the United States Equestrian Federation’s U.S. Dressage Elite Program, which aims to identify and support athletes who have the potential to represent the U.S. in international competition. In 2021, the pair won the FEI Grand Prix Special at Adequan Global Dressage Festival (AGDF) 6, the FEI Grand Prix and Grand Prix Special CDI 5* at AGDF 7 and the FEI Grand Prix and Grand Prix Special CDI 3* at AGDF 10. Having a spectacular USA Olympic Observation Event in Wellington, FL Sabine rode Sanceo in the Grand Prix with 78.978% and the Grand Prix Special with a 78.298% securing her a spot on the 2020 U.S. Olympic Dressage Team.

In Tokyo, Sabine and Sanceo delivered consecutive, foot perfect performances. In her Olympic debut, she scored a 78.416% in the FEI Grand Prix test, continuing to turn out personal best scores and helping to qualify the U.S. for the Team Dressage Finals. Alongside teammates Steffen Peters and Adrienne Lyle in the Finals, Sabine scored an 81.596% in the Grand Prix Special—another personal best and breaking into the elusive 80% club. Sabine and Sanceo were the top scoring U.S. combination and anchored the 2020 U.S. Dressage Olympic team to clinch the silver medal. This was the best finish for the U.S. Dressage team since the 1948 London Games—73 years prior—and only the 2nd time in American dressage. To finish off an epic Olympics, Sabine and Sanceo left their mark in history by once again scoring in the 80s with an incredible 84.300% result finishing in 5th place in Individual competition. 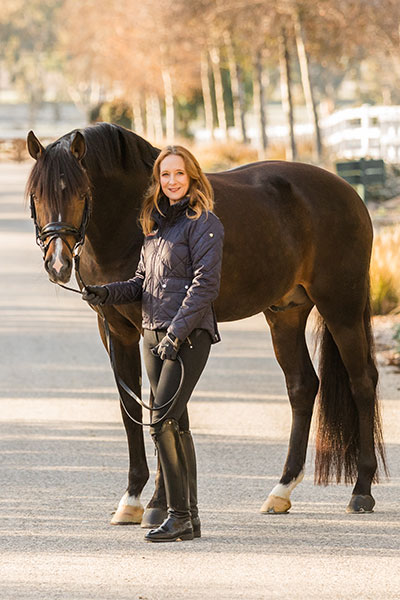