“Our mare, Small Adventure, was having trouble putting on weight and exhibited signs that she was irritated in her gut. Since putting her on the Platinum, she has put on a considerable amount of weight and all of the gut issues have disappeared. We now have the whole barn on the Platinum program.” - Elizabeth Reilly, owner and head trainer

Makoto Farm is the realization of a dream brought about by the hard work and dedication of its owners, husband and wife team, Chris Iwasaki and Elizabeth Reilly. Founded in 2008 and located in beautiful Calabasas, California, Makoto Farm is a highly successful show barn that produces top horses and riders that have won countless championships and national titles across the country. Makoto Farm is home to junior phenom, Augusta Iwasaki. “Gussie” is trained by her mother, Liz Reilly, and also receives training from many other top professionals in the industry including Emily and Ken Smith, Tasha Visokay, and John French. She is a household name on the competitive pony circuit and more recently has also taken the junior hunter and equitation rings by storm. Augusta’s recent credentials include winning the USHJA Hunterdon Equitation Cup Classic—West and the THIS Children’s Medal Final on Vanderpump, riding News Flash to the Grand Hunter Champion title at the USEF Hunter Pony Championships, and winning the $100,000 Platinum Performance HITS Hunter Prix Final aboard Small Adventure and also placing third with Small Occasion. Unstoppable at Indoors, Augusta piloted Small Affair to the Grand Junior Hunter Championship at Capital Challenge, also winning the WCHR Junior 3’6” title and the Best Junior Hunter Rider award for her outstanding talent. At the Pennsylvania National Horse Show, Small Affair was crowned the Junior Hunter Grand Champion and Augusta was named the Best Junior Rider on a Horse. She and “Poker” finished the season by winning the Large Junior, 15 and Under Championship at the Washington International Horse Show, with Augusta being honored with the Best Child on a Horse award.

Liz Reilly rides and trains, and also has an incredible eye for finding and developing young horses as evidenced by the “Small” horses that hold iconic status in the industry today. The first horse that she purchased needed a show name, and she decided to show him under the name “Small Town.” Since then the “Small” horses and ponies of Makoto are known as some of the most talented and rideable in the business and have won coveted titles coast to coast with both professionals and juniors alike. Small Affair, Small Town, Small Adventure, Small Kiss, Small Occasion, Small Collection, Small Celebration, Small Gesture, Small Soldier, Small Suggestion and Small Addition are many of the winners in the “Small” string that are doing great big things in the show ring. 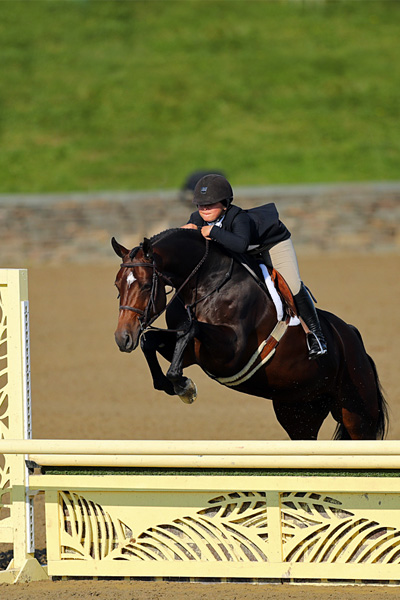