On the Importance of Nutrition

“Our horses come in at 7:00 in the morning. They get fed; they get groomed and ridden. Then they go back to turnout as soon as possible, no later than 2:00 in the afternoon, and spend the rest of the day and night outside on grass. Nutrition is something we spend a lot of time talking about, researching and discussing with the experts at Buckeye and Platinum and with our vets and physios what we think each horse needs to help them be at their best. We're constantly adjusting it to their needs. We don’t put every horse on the same thing. Each horse has a very detailed nutrition and supplement program that they're on. Nutrition is really important to our program and to these horses as athletes.”

As they said in the 1919 jingle, Lauren Nicholson, née Kieffer, has “seen Paree”—or more contextually Toronto, Rio, Pau, Burghley and Badminton. For her young age, she is a veteran and has been there, done that and competed successfully at many venues on many horses. Nicholson was the 2019 FEI World Ranking Top American. She won a gold medal with Team USA at the 2015 Pan American Games in Toronto. She has twice received the Pinnacle Cup Trophy awarded to the leading American rider at the Kentucky Three Day Event. Despite all of her accomplishments to date, it’s possible that Lauren Nicholson, may just be getting started. The 2019 USEA Lady Rider of the Year hails from a self-proclaimed “non-horsey” family. However, she quickly found a turnkey home in the adrenaline-fueled sport of three-day eventing. Nicholson simply could not get enough from the get-go. She displayed a keen talent as a youth, and at just 17-years-old, went to work and train with eventing’s luminaries, David and Karen O’Connor. The O’Connors added jet fuel to her career by honing her raw talent, providing plenty of quality horses to learn the upper level nuances on and introducing her to one of the sport’s major benefactors, Jacqueline Mars. Thriving on hard work, quirky horses and a bit of a wild ride, Nicholson is primed and eager to attack the future with a dreamy string of some of the country’s best sport horses.

The Horse that Lauren Built

Nicholson grew up in Mt. Carmel, Illinois as something of an anomaly to her accountant mother and diesel mechanic father. “My family didn’t have horses around when I was little, but I always loved them. It was never an issue trying to decide whether to ride or not ride as a profession. I don’t think I ever considered doing anything different.” Nicholson continues, “My parents were very supportive, but they weren’t going to bankroll everything. If I was going to ride horses, if I was going to do this as a career, I was going to work for it. So, from the beginning, I had to muck stalls to pay for my lessons. I had to braid. I spent summers and every weekend working at my trainer’s barn and riding every horse I could get.” Her first crack at upper level eventing was brought about by some good fortune closely followed by countless hours in the saddle and lots of elbow grease. When Lauren was just 14, her family purchased Snooze Alarm from her trainer who was pregnant at the time and sidelined from riding. “Maggot” was a spicy chestnut Anglo-Arabian standing 15.2h tall. Interestingly, where most English disciplines have shifted to a nearly complete lineup of warmblood breeds, eventing still holds not only a place, but a seemingly sacred respect and devotion, to Thoroughbreds and other hot-blooded breeds. Many eventers rely on the energy and stamina from the “bloodier” breeds to contest the grueling three days of sport. Although certainly hot-blooded, Arabians are not commonly seen tackling the upper eventing ranks. In 2010, Nicholson rode the unlikely star to complete the then CCI4* Rolex Kentucky Three-Day Event—the U.S. competition offering the highest level of difficulty—finishing 29th overall.

It could be said that Nicholson has taken a horse from rags to riches—twice. After Maggot’s retirement from elite eventing following the RK3DE, Nicholson did not have the money to invest in another ready-made four-star eventer and took a leap of faith by purchasing Maggot’s full brother, Vermiculus, an unproven two-year-old colt. While very stately sounding, Vermiculus translated from Latin means “little worm or grub,” so-called as a nod of brotherly love to Maggot. Nicholson has guided the brave, talented and very cheeky “Bug” at his own pace up the ranks from an unruly novice beginner through five-star competition and has made him into the professional that he is today. Because of her equine “insect collection,” Nicholson is very familiar with taking one’s time and the tireless patience that goes into bringing along a Championship horse—and knows first-hand that they do not necessarily display star power from the onset. Vermiculus was not only a semi-feral young horse, but he was not particularly competitive as a three- or even a four-star horse; no one really knew him. Nicholson remembers, “Once he was given a five-star chance, then he was considered a proper competitor and had a chance to prove himself.” In essence, the 4-mile tracks, 6’ spreads and drops and solid obstacles finally got his attention. “A lot of my five-star horses, as young horses, I wouldn’t have picked them to be five-star horses,” she laughs. “The longer I do this sport, the more I find that I can get to the three- or four-star level with a good athlete. The difference with the five-star horses is their brain. Up to the 4-star level is almost an entirely different animal from a five-star one.”

While Snooze Alarm may have turned heads at Nicholson’s first Kentucky 3-Day Event, Veronica is the horse that sealed her status in the eventing Big Leagues and was her mount in the 2016 Olympic Games in Rio de Janeiro, Brazil. “She made my name in the sport and took me all over the world. I owe her and her owners, Team Rebecca, so much,” Nicholson says fondly. Aside from Veronica, who was a wonderfully made horse when Nicholson got the ride from Karen O’Connor, Lauren has devoted much of her time and energy over the years doing what she loves: bringing young horses along and up the levels from the very beginning and through wherever they end up athletically. “I definitely have a real close connection to those horses that we've had since they were young horses or the ‘homebreds,’ like Landmark’s Monte Carlo, that I’ve had since they were foals all the way up. And Vermiculus, I've had since he was two. I get very emotionally attached to all of them. I know them inside and out, and they know me inside and out.” Nicholson relies on a deep partnership with her horses and has to know that when it comes down to it, they’re going to fight and be able to get themselves out of trouble. “I have to know the horses really well. I like to know their personalities and have them know me because in this sport, especially in the cross country, you really need to have a partnership.” 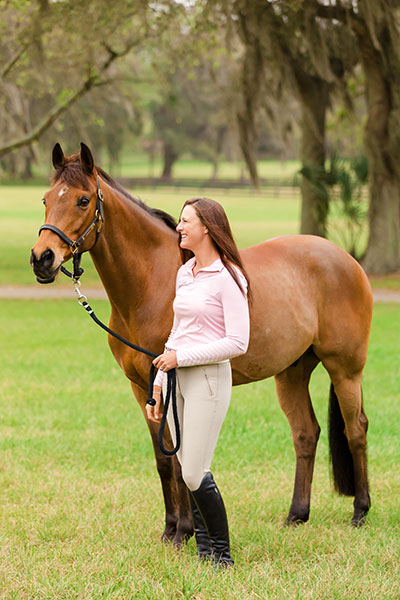