Growing Up in the Saddle

Chris grew up on the back of a horse and quickly became an Appaloosa Youth World Champion under the guidance of parents and professional trainers, Sandy Jirkovsky and Ron Dawson. Showing in the AQHA all-around helped Chris hone his skills as a showman and helped lead him to his true calling, the Reined Cow Horse industry. Chris attended the NRCHA’s World’s Greatest Horseman competition as a spectator in 1999 and was in awe of the sport.

The cow horse industry seemed to be a perfect fit for Dawson. After graduating from high school, he became an assistant trainer for NRCHA 2 Million Dollar trainer, Todd Crawford. Four years later Chris went to work for NRCHA Hall of Fame horsewoman, Carol Rose where his knowledge and opportunities continued to grow. With mentors like Ron Ralls, Don Murphy and Jim Paul, he built enough of an understanding of the Reined Cow Horse to set off on his own.

In 2013 Chris made his biggest mark thus far in the industry aboard a stallion named Travelin Jonez, also known fondly as “TJ”. That year he won four NRCHA majors aboard TJ, catapulting him into the rankings with the best in the business.

Chris is known throughout the industry for being a man who is never too busy to lend a helping hand, share wisdom and provide encouragement to fellow competitors. With the help of his wife and fellow trainer, Sarah, the dynamic team has built Dawson Performance Horses, an elite training program in Aubrey, Texas.

"I like the nutritional benefits Platinum affords my show horses and the fact that every horse in the barn loves it." 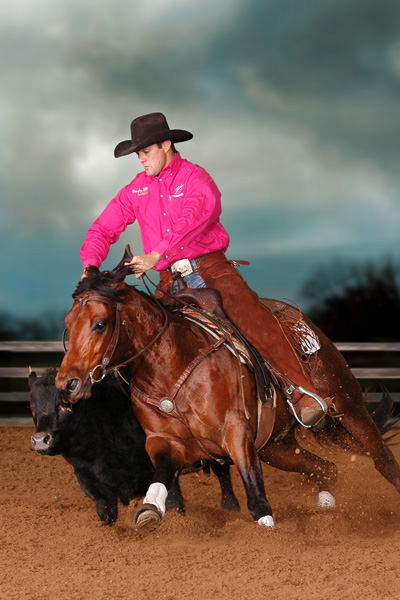