In 2020, She was the No. 1-Ranked FEI Endurance Rider Worldwide; Her Horse also Topped FEI's List

While Holly Corcoran has a history with horses from before she could walk, riding had to wait until 1998 when the single mother was almost 40 and had the choice between purchasing two horses: a Morgan or an Arabian. She bought FG Pennylane, an 8-year old gray Arabian mare, who holds the special credit of getting Corcoran back in the saddle after years away.

Corcoran became involved in endurance in 2003 and undertook the arduous task of conditioning both herself and her horse, Vvalentino. She entered her first 25-mile ride that summer. “I ‘turtled' that race, which means I finished dead last, but I was smitten,” recalls the Stroudsburg, Pennsylvania, resident. This experience propelled her life's journey into the thrilling sport of endurance.

In 2008, Corcoran read about the U.S. Endurance Team competing in Malaysia. She knew immediately that she wanted to be a contender in the international ranks — and recognized she had a lot of work to do in order to fulfill her dream. “Endurance is physically demanding. I was 40 pounds overweight, which I had to lose in order to ride at the level that I wanted to,” she says honestly. “I now actually like the challenge of keeping myself in shape.” She consistently works on her fitness, just like her horses, and pays special attention to her own hydration during the rides, often wearing a CamelBak® backpack for water on the go. 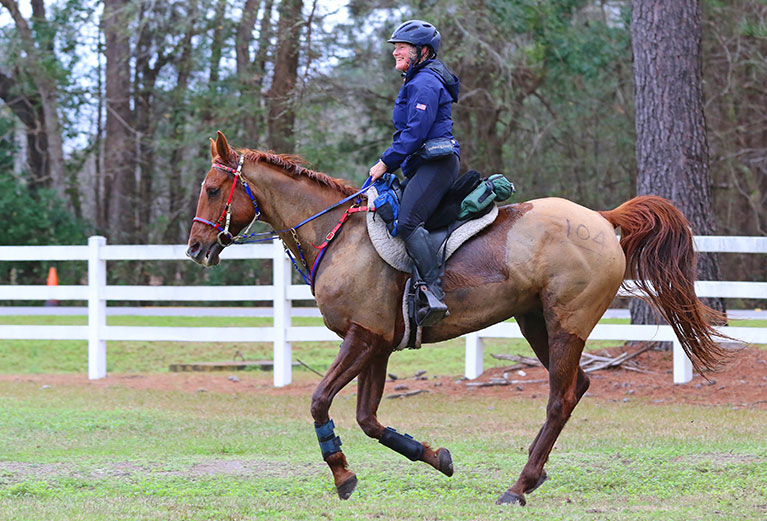 Holly Corcoran's endurance horses are all Asgard Arabians. Her current lineup includes: Poete, a 2007 chestnut gelding and the 2018 National 100-Mile Champion with seven Best Condition awards and Lorienn, a 2012 chestnut mare that finished first in the 2021 CEI3* with a 9:03 riding time and earning the Best Condition honor.

Like all equestrian sports, endurance relies on a deep bond with an equine partner. “When I first started, I did not have the right horse for what I wanted to accomplish,” the 58-year-old says. “So, I bought my first endurance-bred horse named Faveur as a 3-year old and brought him along up the ranks.” Her endurance horses are all Asgard Arabians, bred in West Virginia by the Sayvetz family. Her current lineup includes: Poete (Bandjo de Falgas x Poetikka) a 2007 chestnut gelding and the 2018 National 100-Mile Champion with seven Best Condition awards and Lorienn (Syndicat x Lothlorienn), a 2012 chestnut mare that finished first in the 2021 CEI3* with a 9:03 riding time and earning the Best Condition honor. “Lori” is also qualified for the 2022 World Endurance Championship.

Corcoran is known for her acute attention to details in the maintenance of her horses and relies on her trusty motto: “Take care of the horse, and the horse will take care of the rest.” Her mantra has not steered her wrong — she is one of the United States' most dominant endurance riders. In 2020, she was the No. 1-ranked FEI endurance rider worldwide with an 88 percent AERC and 72 percent FEI completion rates, and her equine partner, Poete, was named FEI's top-ranked endurance horse. Her horses have earned the coveted Best Condition award at the completion of dozens of races, a testament to the impeccable care they receive. Corcoran values that honor as much as crossing the finish line first.

How she prepares and conditions her horses, how she handles race day and what steps she takes to help her horses recover from a 100-mile race.

Corcoran estimates that the true preparation for a solid 100-mile endurance horse takes about three years, requiring not only the correct condition and stamina but also the mental fortitude to complete the race. It takes a lot of time and training to build the base that successful endurance horses need. Once ready, Corcoran aims to have her endurance horse peak about a week before the race, using a 10- to 15-mile ride at race speed (about 9 miles per hour). “Some horses that are prone to tying-up, or those with peak fitness who are more likely to tie-up, need to work in some capacity every day up to the ride,” says Corcoran. “The day before a race, I usually ride six or seven miles at speed to make sure my horse's muscles are loose and ready.”

Corcoran recommends fine-tuning nutrition to keep the ideal weight as fitness and training increases and for horses coming up the ranks. For pre-race nutrition, she says: “As we get closer to races or when we are traveling, I will begin to eliminate grains and use a high-fiber, low-starch concentrate feed. I minimize starch leading up to a race and give free choice hay with small amounts of alfalfa and wet beet pulp with a 30 percent balancer.” Corcoran supplements daily with Platinum Performance ® Equine, magnesium and salt. “My veterinarian recommended Platinum Performance for the colic coverage, and I found using it eliminated a lot of individual supplements I was giving separately,” she says. During heavy work, Corcoran also uses vitamin E and a B-vitamin complex.

The morning of a race, Corcoran will feed some alfalfa along with a low-starch, wet breakfast. During the ride, she recommends having food options that they will willingly eat, including: sweet feed, wet beet pulp, alfalfa, apples, carrots, etc. Some horses are picky eaters about what they eat during a race, so it is important to provide them something tempting that they will consume for sheer calories: “Because they are burning through so much energy after the first loop, I give them what they can and will eat. Many people offer more hay. It depends on the individual horse and what they will eat well to sustain them.”

Corcoran's horses receive branched-chain amino acids and electrolytes mid-loop and at every hold on the course after they have water. There is water available every five miles throughout each race course either from natural water sources or in water troughs to encourage hydration.

During the Race Recommendations:

Immediately after the race, horses should receive free choice water and hay. Corcoran adds feeds back in from her regular program and may increase quantity to help regain weight lost during the competition.

Corcoran poultices and wraps her horse's legs after. She uses a BEMER (Bio-electric magnetic) blanket to support circulation and aid muscle recovery. In the days that follow, “My rule is 1 day off per 10 miles,” she says. After a 100-mile ride, her horses have a couple weeks of rest in pasture turnout, including daily checks for swelling or stiffness. After the rest period, horses will return to work slowly, usually on a walker. Then, they will start back to two or three hours of walking followed by conditioning rides twice a week along with dressage lessons in preparation for the next competition.