The Dressage Foundation's Century Club Recognizes a "Century" of Horsemanship

Move over Red Hat Society. The Dressage Foundation’s Century Club is one of the most coveted titles for North American senior riders and a rite of passage for lifelong horsemen and women. The Century Club recognizes dressage horse and rider pairs whose combined ages total 100 years or more. For example, a 70-year-old rider testing on a 30-year-old horse qualifies with a combined age of 100 years. The Club has no dues, no meetings and no agenda — except to enjoy the special occasion. Celebrating nearly 25 years since the original “Centurion class,” this incredible society of riders is not only experienced in horsemanship but in various and unique life experiences in and out of the saddle.

The Century Club was formed in 1996 at the suggestion of Max Gahwyler, a Connecticut rider, who became just the second member aboard his horse, Prinz Eugen. The inaugural Centurion, Lazelle Knocke, rode Don Perignon and earned her membership after an extensive “three-year vacation” away from riding due to surgery and rehab time. Knocke said of the newly formed club, “Hopefully the Centurion class will be in the forefront of a very interesting opportunity for seniors and dressage as recreational and therapeutic riding. It really is challenging and has long-term goals and benefits.” In the early years of the Century Club, a handful of riders were welcomed in annually. Then starting around 2010, with the help of social media to reach a wider audience, membership increased dramatically. In 2019, 54 new teams joined — the most ever in a single year. Accessible to anyone, anywhere, the Century Club continues to grow with only four states currently not boasting members: West Virginia, South Dakota, North Dakota and Delaware. Members inspire other riders.

To become a member, a horse and rider combination of qualifying age must perform a test of any level, at a recognized or schooling show or three-day event, and be scored by a dressage judge or professional. The rider does not need to show every movement at their level of ride, but it is important to show that rider and horse are capable and work well together. Western dressage riders are also welcome and encouraged to join. Jenny Johnson, Executive Director of The Dressage Foundation, says, “I receive calls on a regular basis from riders who are eager to join the Century Club. Many say it’s on their ‘bucket list,’ even if they won’t be eligible for years.”

Fun is always at the heart of the Century Club, but it has also evolved into a serious endeavor that encourages and rewards senior riders and their beloved typically older horses. Before a rider is scheduled to compete in a Century Club ride, The Dressage Foundation sends its famously recognized gold and black ribbon to be presented at the qualifying show as well as a personalized plaque to commemorate the monumental accomplishment.

The Club puts out an annual newsletter honoring new members who have conquered the challenge and earned their Century Club ribbon. Reading through the newsletter is like walking into the best-written equestrian history book filled page after page with autobiographical stories that are movingly heartfelt and incredibly relatable. The connection to the animal and passion for the sport is felt in each and every rider’s tale. There are those that begged for riding lessons as children, often followed by a first naughty pony or $100 horse. The re-riding horse lovers that had to give it up for a period of time, watching their boots and bridles become dusty home decor after school, kids, career — life — left little personal time for the barn or anything else. Those who consistently had horses through adulthood and remember the sacrifices to “make it work,” noting their need for horses was so acute, it was worth whatever it took to keep them in their lives. Others who could never ride until they were adults, quickly catching the horse bug and never looking back. Many of them reminisce about how horses were the one constant in their lives, and how they leaned on these magnificent animals to help shoulder the darkest of days. The pictures of older riders and senior horses — each still graceful, athletic and beautiful. The friendships, the travel, the failures, the patience and the views from the mountaintop — life’s lessons that hold an extra dimension when experienced in the saddle. These tenderly honest stories are like a warm cup of tea for the soul, nourishing your heart and inspiring hope that you also will still be doing what you love when it is your turn to look back on decades of memories and the steadfast love of horses. Because what Century Club members know is that no matter when horses entered their lives, they made it better, in a way that only horses can — by giving them roots while letting them fly. 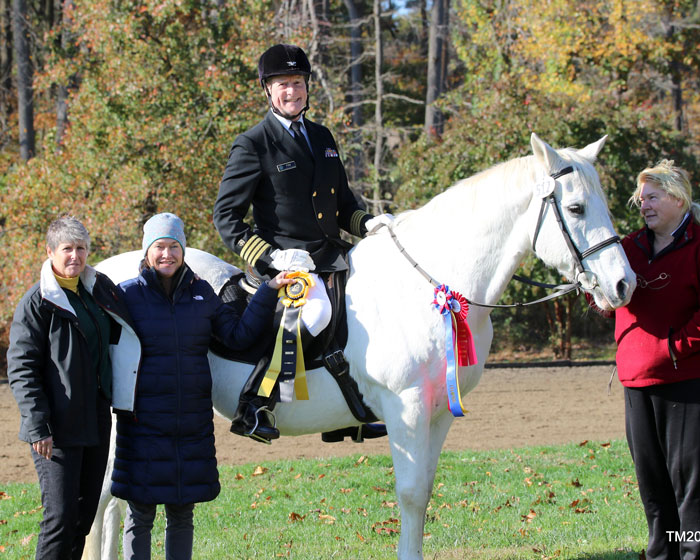 “Being able to ride a judged dressage event in uniform for our Century Ride required a perfect alignment of stars. I doubt there are many others who are still serving in active duty at age 70. I am a medical officer in the US Public Health Service, a physician and scientist ... . I will be retiring from the PHS Commissioned Corps at the end of this year, to continue as a civilian contractor, so the window to do the ride in uniform was small.

I began taking formal riding lessons just before turning 60, satisfying a craving I had felt since childhood. A year later, I met my Quarter Horse Peppermint. He was considered a great trail horse but unsuitable for work in the arena: no brakes. His spirit captured my heart, and I persuaded my instructor Mia Francis to allow usto try. She adapted her commands to the class to accommodate us: “Everyone halt. Larry and Peppermint go in small circles.” We persevered and made progress and a year later, I bought him.

We had setbacks: He cast in his stall and again colicked and needed surgery. We worked our way back again. Then, two years ago, it was my turn. I had a heart attack and coronary artery bypass surgery. I was back in the saddle eight weeks after my hospital discharge. My son Daniel helped me put my body back together. He is a personal trainer, champion powerlifter and bodybuilder. My daughter Amy and I ride once or twice a week and help care for the horses at Folly Quarter Stables, including our three: Peppermint, Andy and Ozzie. I am grateful for the bond between us forged by a shared passion for horses. Claire Lacey has done wonders for us all, human and equine. To Heather Fay, who brought me and Peppermint together, I celebrate Tenacity!” 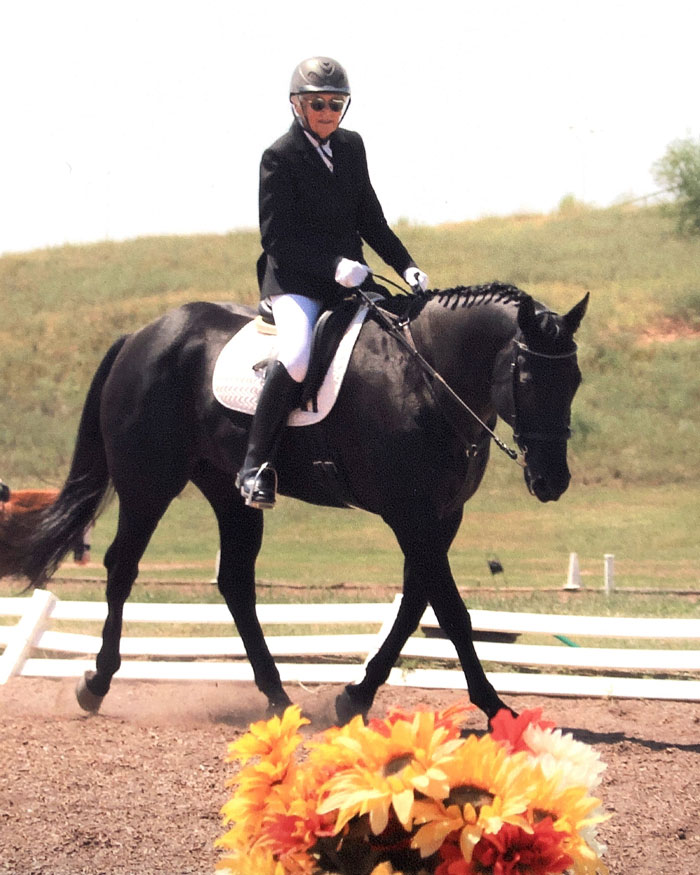 “I always wanted a horse. A bachelor farmer in the area, whose avocation was horses, told my father that 10 was a good age because I would be able to take care of the horse myself. On my 10th birthday, King came down the lane to our house. My friends and I rode every day, and on weekends, we might be gone until after dark. ... It was an idyllic life for a little girl who had always loved horses and wanted to be with horses.

Once boarding school, college and marriage intervened, there was a hiatus. When our two daughters were old enough, we all began lessons. From there, I was introduced to NATRC (Competitive Trail Riding). We began together and learned together. After the girls moved on, I stayed involved for about 25 years, both riding and managing rides. Of course, distance riders are often compelled to take on the big ones. I have my Tevis buckle (100 miles in 24 hours across the Sierra Nevada), and I completed the five-day, 265-mile Outlaw Trail on my horse, Diego. I had a penchant for seeing country, and horseback was the perfect way.

Along the way, I was introduced to Natural Horsemanship. I have been a Parelli student for 35 years, and my horses and I are still learning together.

The years have passed. The distance riding is over. We moved from Phoenix to the very outback of southeast Arizona. A friend introduced me to Colleen Clement, a dressage instructor not too far away (in terms of country living), and that has brought me to the Century Club. I never was interested in showing or arena riding, but I have enjoyed few things more than the pursuit of dressage. ...

I love the subtlety of dressage, the unspoken connection between horse and rider, and the discipline. My Jimmie is not the ideal dressage horse, but he is patient with me and he tries very hard. We keep moving forward. Two years ago, Scarlett Fahrenson of St. George Dressage suggested I join the Century Club. ‘What is that?’ I had to wait two years, but now I know.

Thank you Scarlett, Colleen, Jimmie and The Dressage Foundation. I am proud to be a member.” 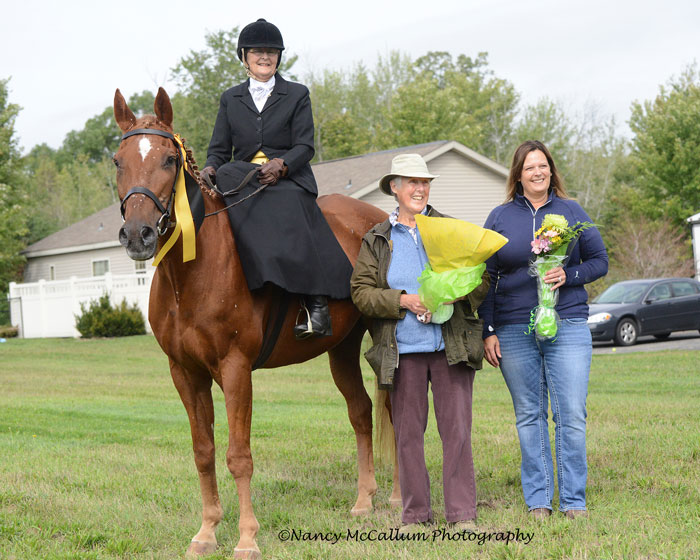 “My history goes back to England. It is the old story — you muck stalls out as an 11-year-old just to ride horses. No formal lessons. I didn’t own a horse until I came to the United States. Over the years, I have been involved with my children and clients in 4-H and in Pony Club. I am proud to be a Certified Member of the American Riding Instructor Association. I give lessons in English and Side Saddle and offer board at my facility. Being a member of the Metamora Hunt Club is great fun. The first time I ever hunted was on Charlie Side Saddle. I have never been so exhausted in all my life.

In all his 30 years, Charlie has accomplished just about everything in his career. It might have something to do with his great bloodlines (Two Eyed Jack). They are known for being tough! He has performed in Western, Trail, Hunt Seat, Jumping, Dressage, Eventing, Fox Hunting and Side Saddle. He has been a member of 4-H, Pony Club and Metamora Hunt Club. Whatever was asked of him, he has given. Such an all-around horse, you could not ask for more. He really doesn’t know he is 30 as he is still very active and FIT!

I must also give a shout-out to Laura Frizzell, who gave me my first Side Saddle lesson years ago. ... There is a resurgence of Side Saddle over the last few years. I love to see that. It is lovely to pass that knowledge on to new riders. ...

I am so grateful to The Dressage Foundation for spotlighting older horses and riders. I had so much help for my test; you cannot do it alone. I thank Erin, Rick, Rebecca, Greg, Cameo, Tina, Astrid, Nancy, Myra (Myra rode Charlie in 2016 into the Century Club), and Sue Martin who allowed us to ride at her farm. I am so very proud that Charlie can finish his showing career inducted into the Century Club, thanks to The Dressage Foundation.”

The Dressage Foundation is a 501(c)(3), non-profit, tax-exempt, donor-driven organization that is dedicated to educating, supporting and advancing the sport of dressage. The organization solicits contributions, appropriately allocates the donations, and awards educational grants to dressage riders of all ages and levels, judges, instructors, breeders, high-performance teams and nonprofit equestrian organizations. For more information, please visit www.dressagefoundation.org.