Theresa Musi-Brantly's dog Zen is not only a World Champion Disc Dog, he is also a seizure alert service dog. He can inform her of an impending seizure before it begins.
PHOTOS BY MAGGIE FAN

Theresa Musi-Brantly was diagnosed with epilepsy when she was four years old. She has the idiopathic type, where there is no known source and no trauma source or family history of seizures. As a young child, her parents noticed her “drifting off” quite a bit as if she were completely lost in her thoughts. Theresa has what are known as petit mal seizures, also called absence seizures. When she is having a seizure, it appears that she is staring off into space, in a trance-like state. She loses space and time. Her parents took her to a doctor who diagnosed her with epilepsy. She was prescribed phenobarbital, a medication commonly taken to help control seizure activity. Unfortunately, the medication did little to control her seizures and instead left her feeling “zombie-like.” At 18, after having terrible side effects that were worse than the seizures themselves, she went off the medication. As she got older, the number of seizures did not increase but the anxiety of when the next one would occur did, which only lowered her seizure threshold. For Theresa, seizures come in clusters. When she has one, she will then have many over the next two or three days. Many children who have seizures are able to grow out of them, but at 51 years old, Theresa continues to have them and does not know life without them.

Before Theresa’s service dogs entered her life, she had to worry every single day about when a seizure might occur. Stress is a major correlating factor, and extreme life stress is a sure trigger for her seizures. She cannot tolerate most over-the-counter medications. Any stimulant, including caffeine and chocolate, can be a trigger, so she has to avoid them all together. Theresa recalls drinking Italian espressos with a friend before she was aware of her caffeine sensitivity and had numerous clusters of seizures shortly thereafter. Theresa’s trance-like state during a seizure often leaves her with foggy memories or no recollection whatsoever. She can function while having a seizure, but she will only remember pieces of experiences, or have a slight memory of a conversation. Immediately following an episode, called the “postictal period,” she experiences acute agitation and anxiety.

Theresa’s dogs are important for every part of the seizure process — before, during and after. Her dogs are able to detect a seizure before it starts. Once Theresa gets the signal, which varies from dog to dog, she leaves work as needed and goes home, takes a break or tries to relax. She then waits for the seizure activity to pass, which can take days. The dogs are there to comfort her during a seizure and immediately following, and during her agitation until she feels back to normal. “They take the worry away from me, and with that, the stress, which is my major trigger. Without that chronic everyday stress, my seizure threshold goes up,” she says. “Just having the dogs literally changes my everyday existence.” 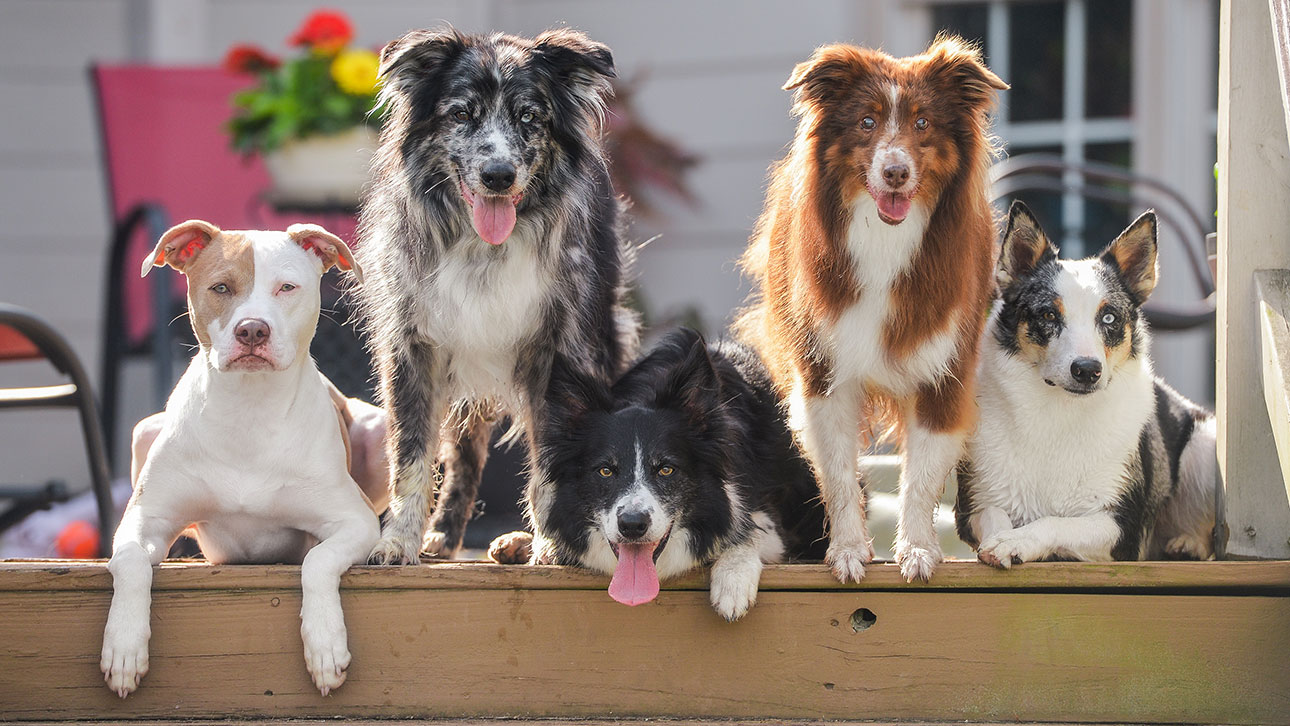 From left: Koa, Zen, Twitch, Dallas and Amari are all competitive disc dogs. In addition, Zen is also a seizure alert dog, meaning he can detect a seizure before it happens and Amari is in training to take over when he fully retires.

Theresa’s first service dog just happened to fall into the role. Ciela was a “Baussie” — a Border Collie/Australian Shepherd cross — intentionally bred to be a frisbee dog. An incredibly athletic dog, Ciela excelled in competitive sport earning a bronze medal in ESPN’s Great Outdoor Games, won multiple national championships and was a world championship finalist. But for Theresa, she was much more than a decorated disc dog. “Being my first service dog, Ciela actually changed my life,” she says. When she was just one year old, Ciela was in a kennel in an exam room at the veterinary clinic where Theresa and her veterinarian husband Kevin both work at and had been acting odd for 20 minutes. Kevin mentioned that the last time she did this, Theresa had three days of seizures. Theresa heeded the warning and went home, and, true to Ciela’s prediction, she proceeded to have numerous seizures over the course of several days. “Sure enough, within four hours, I was having seizures. I didn’t realize that Ciela had been doing that because when I have seizures, I can’t remember those days,” says Theresa.

Ciela would give Theresa a very unique and passive alert when she knew Theresa was going to have a seizure. Theresa calls it “owner focus” — Ciela looked at her directly with a calm eye. “It was an expression that she used for nothing else,” she recalls. “I would see it and tell her ‘Thank you, I’ve got it,’ and then she would relax.” Ciela’s seizure alert differs from her current service dog Zen’s. Instead of a passive stare, Zen, a 12-year-old Australian Shepard, becomes persistently agitated and vocalizes that Theresa is headed toward a seizure. When Zen first made the recognizable alert, Ciela confirmed it for Theresa, giving Theresa her “look” at the same time. Shortly after these canine alarms sounded, Theresa did have a seizure — and a new seizure detection dog. Interestingly, Theresa says that Zen is also able to sense the blood sugar levels of a diabetic co-worker and know when there may be a problem. Nearing retirement, Zen is helping to teach younger pack mate, Amari, the seizure-detection ropes.

“They take the worry away from me and with that, the stress, which is my major trigger. Without that chronic everyday stress, my seizure threshold goes up. Just having the dogs literally changes my everyday existence.”
— Theresa Musi-Brantly, World Champion in the Sport of Disc Dog, an Epileptic and Owner of Two Seizure Alert Dogs

Once she had Ciela looking out for her health and wellbeing, Theresa thought about seizures dramatically less. Theresa is confident that taking the stress off of herself and having to be relentlessly vigilant directly correlated to fewer incidences of seizures. She says, “I could stop constantly worrying about it because Ciela would know ahead of time and would be able to tell me.” Theresa believes her dogs are able to recognize certain body movements in addition to a scent prior to a seizure. But she knows that the mere presence of the dogs reduces her stress, which also leads to limiting her seizures. Her neurologists agree, believing the power in managing her seizures lies in her dog’s ability to keep her calm, making her less anxious and therefore preventing her from entering into a seizure state. She says, “Now, I can just go on with my day and not worry nearly as much.” Although Theresa is aware her epilepsy is a lifetime journey and seizures will not be gone forever, with the help of her dogs, she is able to go years without having one.

Because of her dogs, Theresa has not let epilepsy define her — or slow her down. On top of working as a veterinary technician, she spends countless hours training and competing with her athletic dogs. “My dogs have allowed me to become what I am today,” she says. This includes being a four-time World Champion in the sport of disc and training many dogs to Champion and Reserve Champion World titles, most recently in 2018. Theresa has competed at the Purina Pro Plan Incredible Dog Challenge in three different sports with four different dogs. While she has trained them to be Frisbee dogs, she did not train them to detect seizures. “They come by that on their own,” she emphasizes. These remarkable animals have dramatically improved her quality of life, proving to be at once both therapeutic and incredibly irreplaceable. They have given Theresa back her independence and allowed her to live life to its fullest. She acknowledges the impact her dogs have had on her and says, “It’s life changing to have a dog that can improve your very existence.” Relying solely on her seizure alert dogs, Theresa is medication-free today. 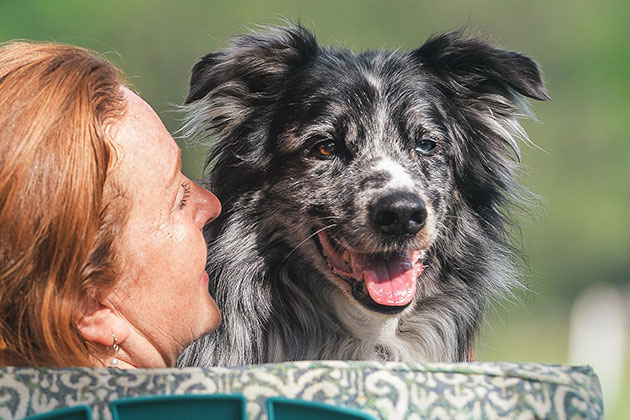 Seizure alert dogs may be able to use this remarkably keen scent recognition to detect when a seizure is going to happen before it actually occurs. Some experts think epileptics may emit a specific chemical scent profile up to 45 minutes before seizing that dogs are able to pick up on. They may let owners know of an impending seizure by incessantly licking or barking. Others stare at their owner without interruption.