Research performed in adult horses and foals, as well as through in vitro trials, indicates that Bio-Sponge® (Di-Tri Octahedral (DTO) smectite) is an effective tool for a variety of health concerns that result in diarrhea or gastrointestinal disturbances.

Bio-Sponge® (DTO smectite) is referred to as an organo mineral as it is comprised of organic matter and minerals. Bio-Sponge® has a large surface area and affinity to toxins. When in close proximity to positively charged ions or organic cations, it binds to them and will remove them from the digestive system. It’s because of this adsorption-effect that Bio-Sponge® is a natural way to aggressively capture and neutralize damaging bacterial endotoxins and exotoxins before they can escape the intestine and reach the bloodstream to cause systematic harm. 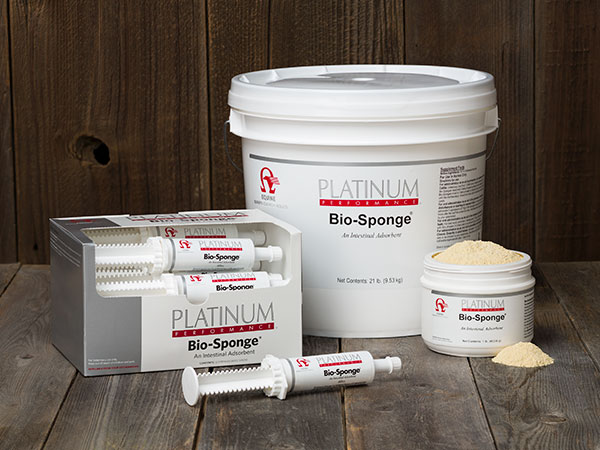 Bio-Sponge® is available in powder or paste and is safe to be given daily for horses that need to consume it as part of their diet for ongoing intestinal disturbances or loose watery stool.

What is the Difference Between an Endotoxin & Exotoxin?

Endotoxins - a toxin that is present inside a bacterial cell and is released when the cell disintegrates. Endotoxins can be responsible for the characteristic symptoms associated with illness such as botulism (better known as food poisoning).

Exotoxins - a toxin released by a living bacterial cell into its surroundings.

Can be used prophylactically for foals on endemic farms, as well as for hoses being treated with antibiotics.

Bio-Sponge® may be helpful for foals experiencing foal heal scours.

Bio-Sponge®
May Be Helpful For Foals

Bio-Sponge® is supportive for intermittent cases of diarrhea that might be caused by a virus, bacteria or other pathogen. It is also widely used with new foals because exposure to infectious agents is especially dangerous for these young horses. Many veterinarians rely on Bio-Sponge® to help support both foals and adult horses with intestinal disturbances. 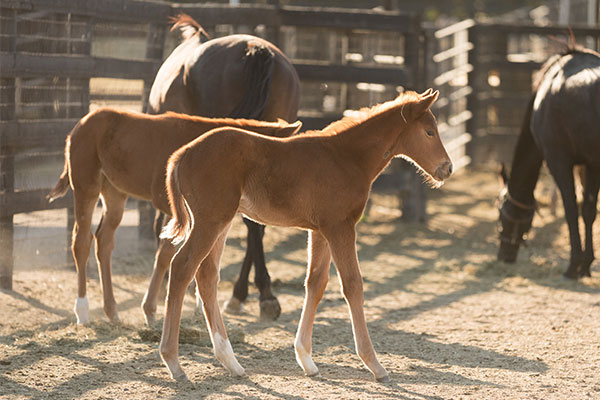 Diarrhea: Administer one 4 oz scoop (97.5 g) of Bio-Sponge® powder or 120 cc Bio-Sponge® paste twice daily or as directed by veterinarian.

Diarrhea: Administer 3 tablespoons (37.6 g) of Bio-Sponge® Powder mixed with 30 cc of water or 30 cc Bio-Sponge® Paste no earlier than 6 hours after foal first nurses. Administer 2-3 times daily or as directed by your veterinarian. *

Foals 2-4 Weeks Prior to Weaning through Weaning

As needed for diarrhea, administer 3 tablespoons Bio-Sponge® powder or 30 cc Bio-Sponge® paste 2-3 times daily for intestinal disturbances and diarrhea. When fecal matter has solidified, Bio-Sponge® may be discontinued.

Created Out of Clinical Necessity

One of the early threats in horses surviving post colic surgery was diarrhea — caused by the use of both prophylactic and therapeutic antibiotics, the stress of not eating or by clostridial toxins. Progress was seen in practice as reliance on antibiotics eased, leaving healthier gut flora and a decreased occurrence of diarrhea post-operatively. However, for patients that did require antibiotics, veterinarians were asking themselves how to ensure patients didn’t succumb to diarrhea. It was this question that led to one of the better tools in the fight against diarrhea, the advent of Bio-Sponge®.

The theory behind Bio-Sponge® is that the cation-charged surface area in DTO Smectite attracts bacterial toxins that are inside the intestinal tract extremely effectively, essentially adsorbing the toxins before they have the opportunity to devastate the horse’s circulatory system. Bio-Sponge® began inside Alamo Pintado Equine Medical Center and was studied by prominent veterinarians in both clinical and university settings.

“Being a referral hospital, we go through a lot of Bio-Sponge® here. We use it all the time. It’s one of our best therapies.”
— Dr. Chris Boutros, Waller Equine Hospital

Bio-Sponge® has been used in practice for 20 years and has been identified in several university as a highly effective adsorbent for toxins associated with intestinal disturbances.