A Career Is Born

Tanya began her life-long career with horses when she was eight. Showing all-around horses for almost 17 years, she worked with various pleasure & all-around trainers throughout her teens.

In 1993 she was drawn to the sport of reining. During the course of several visits to NRHA & AQHA champion Bob Loomis’ ranch a few times a year — gaining as much knowledge as possible in those meetings; and working & riding with various reining trainers including the guidance and influence of NRHA Futurity winner John Slack, Tanya decided to focus her professional training career in the reining industry.

An early highlight in the NRHA Futurity show pen was in 2000 when Tanya rode Dunnits Cowgirl to place 5th in the Intermediate Open. Having raised and trained the mare herself made it an incredibly special event.

Tanya has gone on to be named the NRBC Intermediate Open Derby Champion, earned herself a spot on the NRHA Top 20 list of the highest earning reining professionals and has continued to be a finalist in all major NRHA events.

"Since I have been using Platinum Performance, my horses have never looked or felt better. It is really important to me as a trainer, owner and breeder to maximize my horses' potential and wellbeing, and with Platinum I get that in all my horses. I have never had a product do what Platinum has done for my horses, I stand behind it 110%, as does my vet." 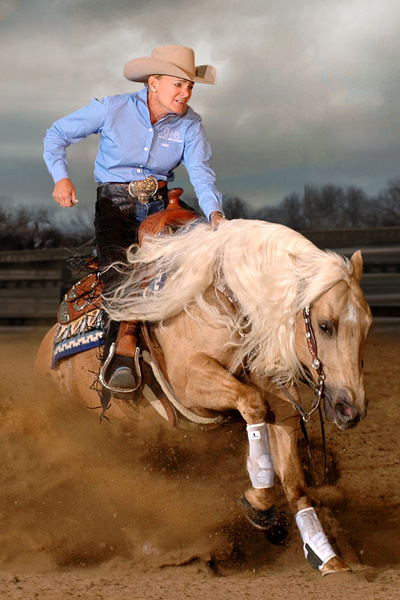