“My horses work very hard and travel consistently throughout the year. They deserve the best care whether that be veterinary, farrier, the best tack, footing, etc. What they eat is essentially deciding their health from the inside out; it needs to be the best too.”

Peter Pletcher is the king of the hunter ring. Owner of PJP Farm in Magnolia, Texas, Peter is one of the most successful hunter riders in the country having ridden and trained many of the country’s top horses and has received most of the industry’s top honors. He has represented the United States on multiple occasions at the World Champion Hunter Rider Team Challenge as well as International World Cup competitions. He has been named the Chronicle of the Horse’s Professional Rider of the Year and was honored with the Emerson Burr Trophy as the top hunter rider of the year in 2002. With championships at all the major Indoor horse shows, the Devon horse show, the Winter Equestrian Festival, countless National and International Hunter Derby wins, he is arguably one of the most decorated hunter riders of all time. A true talent, he has the innate ability to get along with many different types of horses, evidenced by the fact that he has won the title of World Champion Hunter Rider multiple times. True horsemanship is called upon in the final round of the WCHR event when the final four riders must all swap horses and be judged riding each of the other finalists’ mounts around the same course. In 2015, Peter reached a major career milestone when he was inducted into the USHJA’s Elite Million Dollar Club for total prize money earned by a professional rider in recognized USEF divisions.

As talented as Peter is as a rider, he is equally as gifted as a trainer. He teaches hunter/jumper clients throughout the country at the highest level of the sport and nurtures each to individual success. A natural teacher, Peter has the ability to get the best out of every individual horse and rider from pony kids to junior riders to adult amateurs. A favorite story of Peter riding with a timid child so she can securely learn to canter a new pony is a single scene captured of thousands in his career where he cultivates the sheer joy of horses in a typical, unassuming style. Peter makes time to give back to the sport as well by volunteering for online educational training sessions and is an annual title sponsor and participant of the Pin Oak Charity Horse Show in Katy, Texas where proceeds go to the Texas Children’s Hospital and the Texas Children’s Cancer Center. Skill and dedication combined with a contagious good mood, dry wit and the ability to make riding as fun as it should be, even for serious competitors, is the recipe for an already legendary career, or as Peter might say, “Perfect!” 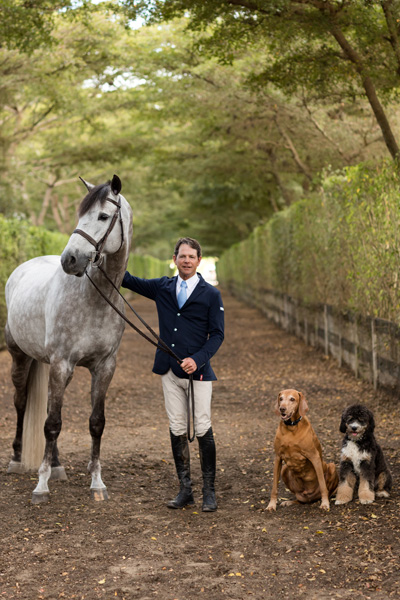