“I try to teach the girls who come to work for me that becoming a top rider is 50% riding skills and 50% paying attention to details. You can be the best technical rider in the world, but if you do not pay close attention to your horse's physical and mental well-being, then you will be a good rider with nothing to ride because you're going to miss something important. Nutrition is something very important to me for so many reasons. Working with Platinum gives me the confidence of knowing that we are giving our horses the best possible chance to becoming everything they can be.”

Olivia LaGoy-Weltz grew up in the San Francisco Bay area where she rode and competed in dressage and eventing through age 18. She credits trainers Sandy Howard and Heidi Riddle for giving her a strong foundation in rider biomechanics and quality horsemanship skills. After graduating from high school, LaGoy-Weltz moved to Europe and spent five years working and training in Holland and Germany with several elite trainers and riders at top sales and competition barns. She returned to the United States in 2007 and started her own dressage training business, becoming head trainer at a large facility in Northern California. In 2009, she moved to Versailles, Kentucky, to ride sales horses on behalf of her former employer in Holland, Egbert Kraak. This move gave her access to the Florida competition scene where she had great success with her horse, Rifallino, at the Grand Prix level. In 2013, she moved to where she is currently based out of in Haymarket, Virginia, with her husband, Eliot. Her stunning Mountain Crest Farm runs a selective training program dedicated to superb individualized care and top-quality horse and rider development.

Lagoy-Weltz purchased the Danish Warmblood Rassing’s Lonoir, or “Lono” familiarly, from a large sales barn in Denmark at the end of his 7-year-old year. She remembers, “When we got him home, I realized why he was for sale, as he displayed his talents for standing on his hind legs and taking me out of the arena.” With hard work and a lot of patience combined with his natural athleticism, Lono has grown confident in himself over the years and developed a strong partnership and bond with LaGoy-Weltz. “I love him dearly, and he is full of personality and the snuggliest horse in the barn. Above all else, being able to give a happy and healthy life to him has been my greatest personal accomplishment.” Dedication and patience have paid off as LaGoy-Weltz and Lono have risen through the ranks to superstar status at the most competitive and difficult Grand Prix level with continued success, both nationally and internationally. With a star-studded résumé of wins and championships in the past several years at some of the world’s most prestigious venues, the dominant pair have been on multiple Gold medal Nations Cup teams and were selected as traveling alternates for the 2016 Pan American Games. LaGoy-Weltz and Lono are short-listed to represent the United States at the 2018 World Equestrian Games in Tryon, North Carolina. 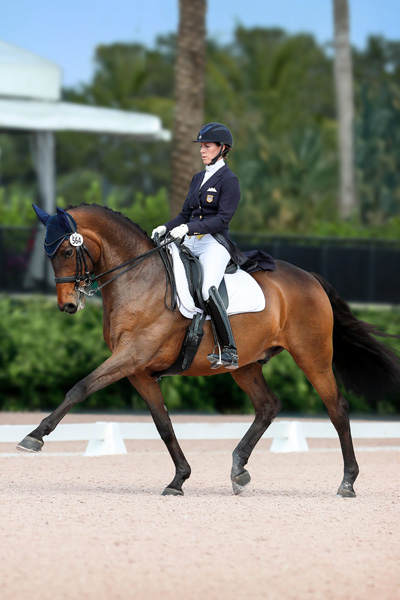 This potent formula helps maintain muscle strength, supports endurance and promotes post-exercise recovery, including soreness and fatigue, by providing amino acids (the building blocks of protein) and powerful antioxidants required for normal muscle recovery. Platinum Renew® supports horses' recovery after exercise and should be given within one hour after exertion. Also available as Renew Paste, convenient for pre- and post-performance and 2 times as potent as Renew powder.