"These top performance horses, every step that they take is planned. Platinum Performance has just been wonderful for the horses. You can see it in their conditioning, recovery time and overall fitness. Just like any person, when you feel healthy and you're not run down it comes through in your willingness to work."

In his long equestrian career, Ward has won three Olympic medals, three world championship medals, three Pan American Games medals and a World Cup Final Gold Medal. In April 2017, McLain Ward was ranked #1 in the Longines FEI world rankings for the first time. He was ranked #1 through June 2017, but in July 2017, Kent Farrington bumped Ward to #2 in the world. This was the first time two Americans stood at the top of the Longines FEI world rankings.

McLain and Sapphire not only won two Olympic gold medals, they also earned a silver medal at the 2006 World Equestrian Games, won the 2010 Pfizer HITS $1 Million Grand Prix, and the $1 Million CN Grand Prix at the Spruce Meadows Masters. Upon her retirement, Ward said, “I am so grateful that fate chose me as the one to be in her life, be her rider and partner as she blazed her trail into show jumping history. There will be times I will certainly miss her being by my side when the pressure is on. But when I think of her all I have is incredible memories. As I look back all I can say is how lucky we were."

Representing the United States in team show jumping, “Annie” was Ward’s mount for the 2016 Olympic Games in Rio de Janeiro. The pair earned a silver medal, jumping double clear in the team competition. In 2017, in his 17th appearance at the Longines FEI World Cup Final, McLain won the Championship aboard HH Azur. The pair completed the week of competition with zero penalties after five rounds of jumping, one rail ahead of the second place rider.

Clinta stepped up to the spotlight when HH Azur suffered a minor injury that kept her out of the 2018 World Equestrian Games in Tryon, North Carolina. Ward, the team’s veteran and anchor, rode his ultra-careful mare to perfection in an unprecedented jump off, edging out Sweden for a dramatic win for the United States. The U.S. Jumping Team won a historic gold medal— the first world championship team title since 1986 and the first since the World Equestrian Games debuted in 1990—and qualified the U.S. for a spot at the 2020 Olympics in Tokyo. 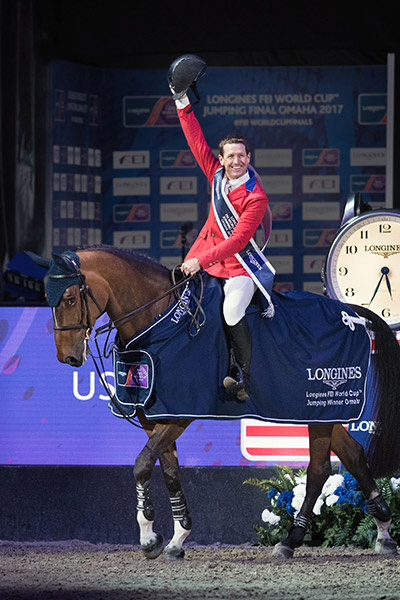