“My top Grand Prix horse, With Wings, is a once-in-a-lifetime horse for me. Several years ago, I was looking for the optimal supplements for my horses. I only like to use the best of the best, and based on my research and after speaking to my vets and trainers, it was clear that Platinum was the best option.”

The Pearl of Show Jumping

Born to an American father and a Japanese mother in Tokyo, Japan, Karen moved to the United States at just six months of age and began riding for the country of Japan in 2014. A recent graduate from Yale University in Economics, she has since turned her entire focus on full-time training and preparing for top 5* Grand Prixs and Championships. Karen currently trains with world famous show jumper, Rodrigo Pessoa, and has in the past trained with many other notable horsemen including Scott Brash, Paul Schockemöhle, Ian Millar, and Mario Deslauriers. She has four current mounts: Sari, Little Lord, Kino and her superstar, With Wings. Karen says of With Wings, “He is a very special horse, and I am absolutely obsessed with him! He is extremely athletic and is everything that any rider wants in a horse; he’s brave, careful, scopey, adjustable, smart, and elastic. I’m very lucky to have him, and we’ve had a lot of success together.” “Wings” also has lots of spunk and personality and is infamous at the horse shows for the way he can buck and spin which Karen says, “makes him even more fun to work with!”

As a junior rider, Karen won the USEF National Junior Jumper Championships. In 2016, she made history as the first rider to earn an international win for Japan at Spruce Meadows by topping the leaderboard of the CP CSI 5* CIBC Cup, as well as being clear and in the ribbons nearly every time she and Wings stepped out. The 2017 Winter Equestrian Festival circuit was incredible in every way. She placed 3rd in a CSI 5* $130,000 Grand Prix Qualifier and a couple weeks later won both the CSI 5* $130,000 Grand Prix Qualifier and the $380,000 Douglas Elliman Grand Prix. A couple weeks after that, the duo placed 3rd in the $500,000 Rolex Grand Prix. Karen and With Wings were awarded the Simba Run Memorial Trophy for winning the most prize money in 1.45-1.60m open jumper classes during the entire 12-week WEF circuit. Karen was the youngest rider to win an FEI Grand Prix during the entire WEF circuit, and also the only female rider to do so. Karen only recently stepped into the professional ranks but is making headlines by competing and winning against the most famous of household names in show jumping. Her talent and leadership were recognized by peers when she was voted to win Noelle Floyd’s Best of 2017 Break Out Rider of the Year & Leader in Horsemanship. 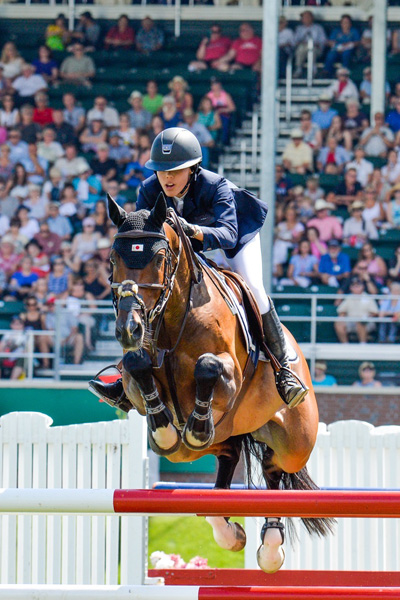