"Platinum gives me the competitive edge, helping to maintain their soundness and health. The horses love it, and the Paks make supplementing so easy, especially when traveling so much. Dressage can be a complex disclipine, but Platinum Paks bring simplicity to our program."

Jan Ebeling grew up in Germany and immigrated to the USA in 1984. Early in his career, from 1998 to 2003, Jan won several national titles on horses such as Gucci, Ricardo, Liberte, and Feleciano. In 2003, Ebeling earned a spot on the Pan American team in Santo Domingo aboard Feleciano, and clinched the gold medal for the United States when he was the highest ranked USA team competitor. Ebeling and Feleciano finished 5th overall at the Pan Am Games. Ebeling has also personally shown and competed in the World Cup in 2007, 2009, 2011, and 2012.

Ebeling and supermare, Rafalca, had a long and star-studded partnership together. At the 2011 Reem Acra FEI World Cup Dressage Final in Leipzig, Germany, the dancing duo were the highest-ranked U.S. combination in both the Grand Prix Test and the Freestyle. In 2012, they were awarded a spot onto the 2012 USA Olympic Team and competed in London at the Olympic Games, fulfilling a lifelong dream. Ebeling and Rafalca ranked third at the USEF Festival of Champions with an average score above 73%. As a member of Team USA, the pair captured team Bronze at the Nation’s Cup in Aachen, Germany. Ebeling and Rafalca placed third in the selection trials for the 2014 World Equestrian Games and were placed on the short list, but a minor injury prevented Rafalca from competing.

Ebeling has many talented horses in training including two exceptional prospects: the Oldenburg gelding, Sergio Leone, formerly named Santo Domingo, and Indeed V, a Danish Warmblood mare. Rafalca, Ebeling’s former Olympic partner, is now having beautiful babies to keep the talent in the family, starting with the 2016 filly, Rafaela. A family of riders, Ebeling and his wife, Amy, share their equestrian passion with son, Ben, who is very competitive in the dressage arena as well as the jumper ring.

In addition to Ebeling's heavy competition and training schedule, he serves as a USDF Young Rider clinician and has been Chef d’Equipe for Region 7, is a member of the High Performance Dressage Eligible Athlete Committee, and conducts clinics nationally and internationally. Ebeling rides and trains out of The Acres, a full training and sales business in Moorpark, California." 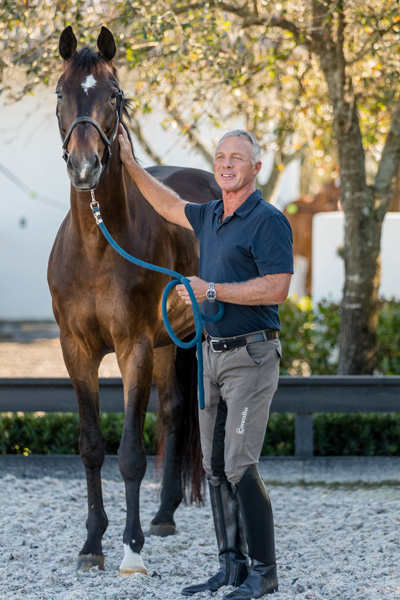