“Platinum Performance supplements and products have been a staple in my horse care management program and business operations since I started competing consistently at the international levels. The difference we’ve seen in our horses’ performances and overall health is remarkable, and these are products we couldn’t live without.”

Brian Moggre is one of the top up-and-coming young jumping athletes representing the U.S. At just 21 years old, he has accumulated numerous top finishes in some of the most competitive show jumping classes in the world. Moggre competes at the highest levels of international competition, basing himself in Wellington, Florida, during the winter and in the Netherlands during the spring and summer months.

Moggre has been a mainstay in the U.S. Jumping Team pathway since his youth. He started his competitive career in the jumpers, highlighted by a junior individual bronze medal at the 2016 FEI North American Youth Championship (NAYC), team gold the following year as a young rider athlete, and team gold in 2017 and 2018 at the USEF Junior Jumper National Championships/Prix des States. Moggre continued his success in the equitation ring, winning the Dover Saddlery/USEF Hunter Seat Medal Finals in 2018 and finishing as reserve champion at the ASPCA Maclay Finals.

In 2019, Moggre posted his first FEI grand prix win in the FEI Jumping World Cup CSI3*-W at Live Oak with his longtime partner, MTM Vivre Le Reve. He followed his performance up with wins in the 2019 Spruce Meadows Cardel Cup and the Friends of the Meadows Cup with MTM Flutterby, and in the National Horse Show CSI4*-W FEI Jumping World Cup with MTM Vivre Le Reve. Moggre was named to the team representing the U.S. at the 2019 FEI Jumping Nations Cup™ Youth Final CSIOY in Opglabbeek, Belgium, where he and MTM Los Angeles helped secure team gold. Moggre was the 2019 recipient of the United States Equestrian Team Foundation’s Lionel Guerrand-Hermès Trophy that is awarded to a Junior/Young Rider in an Olympic discipline who exemplifies the Team’s ideals of sportsmanship and horsemanship.

In 2020, Moggre was part of the winning U.S. team at the FEI Jumping Nations Cup Wellington CSIO4* riding MTM Vivre Le Reve. The pair returned to Wellington in November 2020 to place second in the FEI $137,000 Noltrex®Vet CSI3* Grand Prix.

In 2021, Moggre and Balou Du Reventon helped the U.S. team win the FEI Jumping Nations Cup Wellington CSIO4*. Moggre partnered with MTM Vivre Le Reve to win the $50,000 Adequan WEF Challenge Round 12 CSI4* during week 12 of the Winter Equestrian Festival. He secured a tremendous second place finish in the 2021 Rolex Grand Prix of Aachen, following their win with the U.S. Jumping Team in the prestigious Mercedes Benz Nations Cup CSIO5*. With Balou du Reventon, Moggre was selected as the U.S. Jumping Team’s direct reserve for the Tokyo 2020 Olympic Games that took place in July 2021.

In 2022, Moggre has had a strong season so far with a third-place finish in the $406,000 Fidelity Investments Grand Prix CSI5* with Balou du Reventon, in addition to anchoring the NetJets U.S. Jumping Team with the final trip in the FEI Jumping Nations Cup CSIO5* in Knokke — Hippique aboard Balou du Reventon. 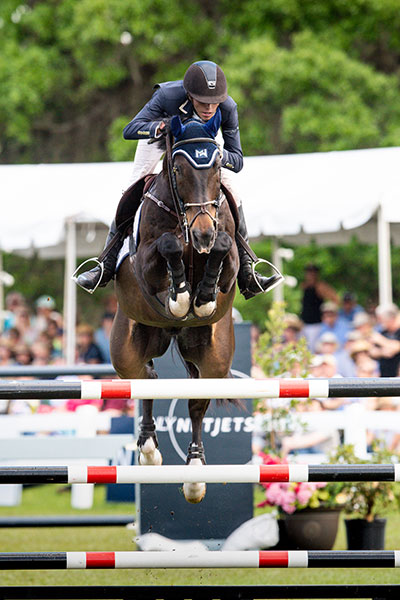