Horses weren't always domesticated. In fact, they once roamed free, evolving on a diet of grass, tree bark and other forage found on the nutrient-rich grasslands that were their native habitat. This diet was high in antioxidants and anti-inflammatory omega-3 fatty acids. As horses became more domesticated, well-intending owners shifted the equine diet to an approach that fit the parameters of feeding a more confined animal. This more modern diet often includes grains, concentrates and cut hay, and provides a higher level of pro-inflammatory omega-6 fatty acids and free radicals than the horse was designed to consume.

Omega-3 Fatty Acids, Antioxidants & Your Horse: Why Do They Matter?

You’ve heard the adage, “you are what you eat.” Like many things, it may be old, but it’s wise and continues to hold true. Since horses are unable to synthesize crucial omega-3 fatty acids within their own bodies, they rely on their diet to provide these and other essential nutrients. Omega-3 fatty acids are largely responsible for helping horses remain in an anti-inflammatory state, below the disease threshold that carries a previously healthy horse into the realm of dangerous inflammatory conditions — colitis, laminitis and arthritis, just to name a few. This makes the ratio of omega-3 fatty acids to omega-6 fatty acids in your horse’s diet of paramount importance.

Equally as vital are the antioxidants present in your horse’s body. Known as the quiet warriors, antioxidants are responsible for fighting off damaging free radicals and protecting cells. Free radicals can be caused by everyday interactions with things as common as dust, environmental pollutants and intense exercise. Cellular health may not often be top of mind when considering your horse’s longterm well-being, but in actuality your horse is a walking compilation of trillions of cells. If the cells are healthy, the horse’s health typically follows suit. Antioxidants come into play in virtually every aspect of a horse’s health, including the joints. Joint health can be influenced by antioxidants due to their ability to curb the progression of damaging degradative enzymes that are one of the primary causes of joint disease in horses. Providing your horse with supplemental antioxidants helps support the body’s natural defenses against free radicals since it takes one antioxidant molecule to combat every one free radical.

What Hay Delivers and When Supplementation Can Help

High quality forage is the foundation of the best feeding programs, but the challenge lies in creating a complete diet with hay alone while feeding only a moderate to minimal amount of grains and concentrates, if any at all. The importance of a more natural diet cannot be underestimated. Starting with the right hay is crucial, but realizing exactly what your hay is providing — and what it’s not — is equally as lofty. For instance, the level of omega-3 fatty acids and antioxidants in fresh, still growing alfalfa is 38-40% higher than the same alfalfa just 6 weeks post-harvest. With nutrient rates diminishing over time in even the highest quality hay, the bailed hay we feed our horses stops short of delivering all of the necessary nutrients a horse needs to function at their best, making supplementation an excellent choice. This nutrient gap is one of the primary reasons Platinum Performance® Equine was developed to provide a healthy source omega-3 fatty acids and antioxidants, along with the trace minerals and vitamins that have diminished in hay over time. By combining a forage base with the right supplementation, a feeding program can be made not only simple but ultimately effective, well rounded and complete.

Supplementing horses on a forage-based diet, or those that are being fed moderate grains or concentrates, can complete the picture and help horses to more efficiently process calories and maintain an ideal weight. This approach was tested at the University of California at Davis, where researchers studied eight horses fed a diet of oat and alfalfa hay. Each of the eight horses then had their hay reduced, replacing it with Platinum Performance® Equine and creating a diet of equal caloric value to their former hay diets. After 11 weeks of supplementation, 87.5% of horses gained weight on the diet of hay and Platinum Performance® Equine without a significant increase in energy consumption. The studied horses were able to maintain weight due to their consumption of nutrient-dense calories from Platinum Performance® Equine working in conjunction with their hay diet to create better efficiency and nutrient utilization.

Influence of Diet on Colic Rates

Summary: Low grain consumption can play a role in decreasing the rate of equine colic. Horses that consumed higher amounts of grains and concentrates had increased odds of experiencing a colic episode.

Summary: Researchers at CSU's Equine Reproduction Lab studied mares, ranging from 6 to 25 years old (average = 20), most of which with histories of suboptimal fertility. Eggs were harvested from the mares and implanted into recipients, either as fertilized eggs (embryos) or as unfertilized eggs, after which the recipient mare was inseminated. Pregnancy rates were approximately 23% per transfer initially.

Summary: Studies performed by researchers at the University of California at Davis compared the allergic responses in horses before and after supplementation with Platinum Performance® Equine when exposed to common allergens.

Results: Allergic responses were evaluated before and after 11 weeks of supplementation with Platinum Performance® Equine. There was as much as a 50% reduction in allergic response to some antigens.

Results: Mares consumed a mostly hay diet, augmented with a small amount of a commercial concentrate and supplemented with Platinum Performance® Equine for 9 months. The borderline insulin-resistant horses had a significant drop in plasma glucose and insulin (p<0.05), and cortisol tended to be lower following supplementation (p<0.09). This correlated to a significant 48% improvement in the average RISQI score (an index of insulin resistance), reclassifying these horses from borderline insulin resistant to normal. 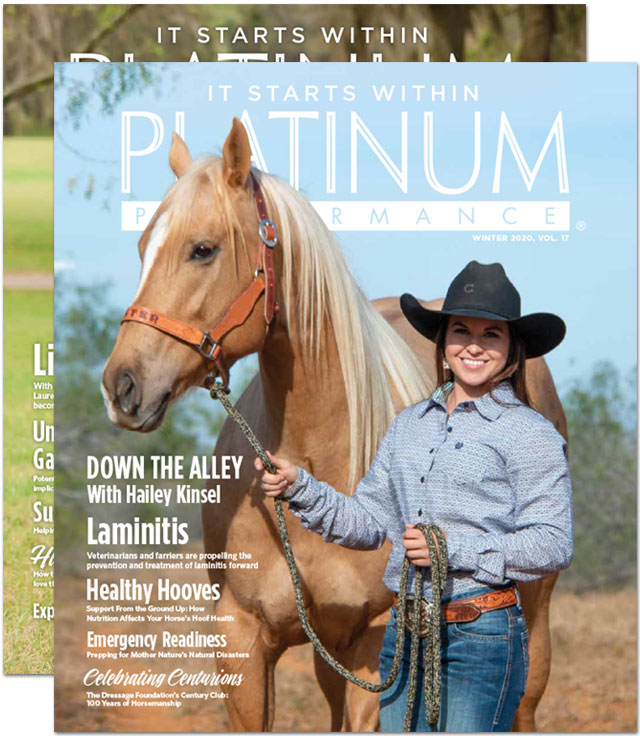